Abstract: The Antarctic Ice Sheet exhibits astonishing spatial and temporal variability in ice flow rate and associated mass loss. Rapid ice flow is concentrated in narrow corridors called ice streams that together with outlet glaciers account for the majority of the current mass loss from the ice-sheet interior to the ocean. The response of the ice streams to climatically induced perturbations is hence highly consequential for future projections of sea level, but our understanding of the physical processes governing ice-stream dynamics is limited. This limitation is particularly concerning in light of observations indicating that in the past, the position, width, and flow speed of ice streams have varied notably on decadal to centennial time-scales. In this talk, I will present a sequence of mathematical models that shed light on the physical processes that control potential adjustments of ice streams in the near future. Our analysis suggests that existing data and models are too incomplete to reliably assess ice loss from the two ice sheets under changing climatic conditions. However, I argue that the uncertainty itself is a valuable scientific contribution for informing climate adaptation planning and briefly lay out an avenue for making progress on science-based, equitable adaptation in the San Francisco Bay Area.

Jenny Suckale is an assistant professor in the Department of Geophysics at Stanford University. Prior to joining the Stanford faculty in 2014, she completed a Ziff Environmental Fellowship and lectured in the Department of Applied Mathematics at Harvard. Dr. Suckale received her Ph.D. in Geophysics from MIT and a Masters in Public Administration from the Harvard Kennedy School. She also worked as a research assistant at the GFZ and as a scientific consultant, examining strategies to mitigate the impact of natural and environmental disasters in vulnerable communities, before entering graduate school. Dr. Suckale’s research advances basic understanding and predictive capabilities of complex multiphase flows fundamental to various geophysical systems, including volcanoes, glaciers, and magma oceans. 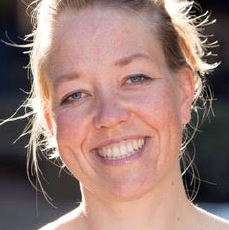